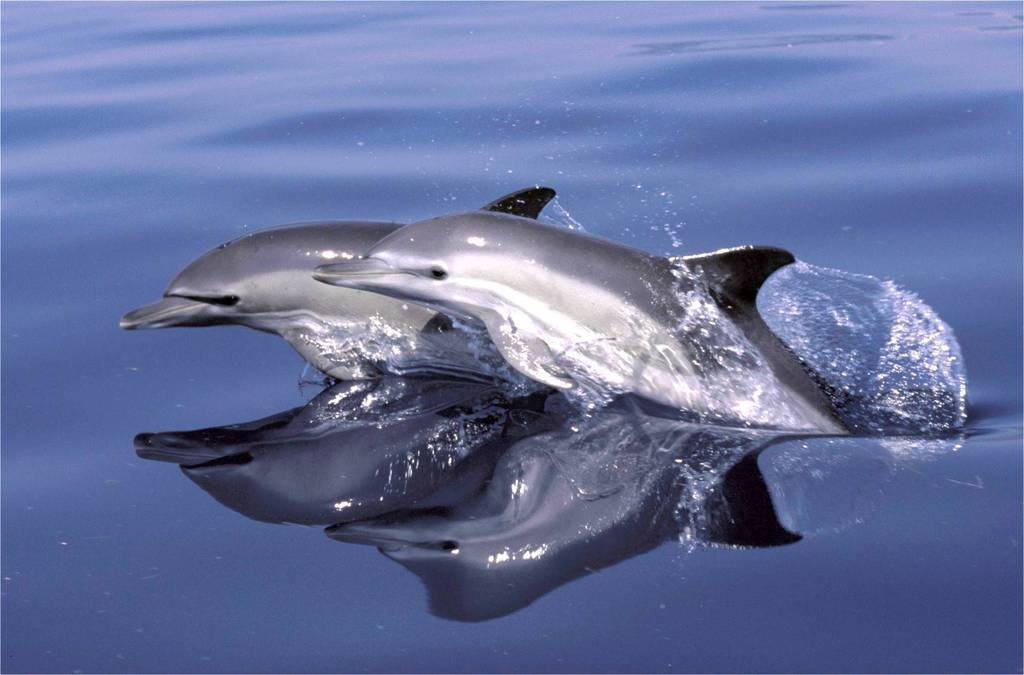 Picture from Giovanni Bearzi from the IUCN web page.

This is a very gregarious species that forms groups usually of about 30 individuals, but that can be hundreds and sometimes even thousands of individuals. It’s a fast and agile dolphin. It can be submerged to 300 m deep and stay without breathing between 8 and 10 minutes, although it usually stays under the water between 10 seconds and 2 minutes.

It is a coastal species present in the Atlantic and Pacific oceans. Usually inhabit the lower part of the continental shelf and the upper continental slope, although at the eastern Pacific is inhabits also ocean environments. The species feeds on fish shoals and is frequently caught in trawl nets, driftnets and other types of fishing gear. Although it was a very abundant species in the Mediterranean, it is currently considered to be a rare species on the Catalan coast. The causes of its decline are not clear. On the one hand, overfishing could have diminished the abundance of their main preys. On the other hand, climate change could also affect the species, because in the Atlantic it seems to prefer zones with an average temperature of the sea surface of 13.5ºC. 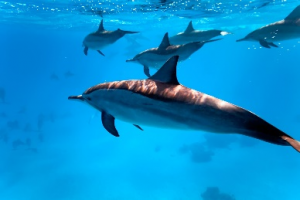 This species is, by far, the most frequent cetacean in the Mediterranean. We find it beyond the continental shelf in areas of a depth greater than 600 meters, in areas with a higher primary production. In this sense, there are two important regions for the striped dolphin in the Mediterranean, the Liguro-Provenzal zone and the Alborán sea. The high productivity in the two areas favors the presence of small fish and cephalopods, which are the main prey of the striped dolphin. The maximum documented age for the striped dolphin is 57 years. In the Mediterranean it has been seen that it usually forms groups of less than 20 individuals. It is a very active species both inside and outside the water and jumps are frequent in its behavior. In the Mediterranean, it is common to see them following the stelae of boats. Your dives can last between 5 and 10 minutes. The trend of the population on a global scale is unknown, but the global abundance of this species means that the IUCN (International Union for the Conservation of Nature) has classified the species under the status of minor concern. In the Mediterranean, the species has been classified as vulnerable because it has been subjected, and still is, to several threats that have reduced its population in recent decades, such as water pollution, epizootics and accidental catches in fishing gear. 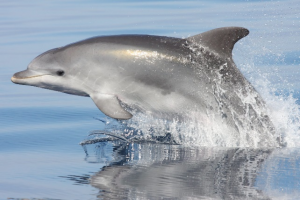 The bottlenose dolphin is found all over the world both in coastal waters and open sea, including ports, bays, gulfs and tropical and temperate estuaries. In the Mediterranean, contrary to what happens in the Atlantic, it is basically found on the continental shelf. It is one of the most studied and known marine mammals. It is a very intelligent and higly social species that often travels in groups of variable size. The majority of the populations do not migrate, which generates a strong population structure and causes that, when disappearing the species of an area, the recolonization may be slow.

Mobile dolphins mainly feed on benthic fish and small squid, but they also feed on pelagic species such as sardines. When feeding they may dive for 4-7 minutes. Although globally the species is classified by IUCN as a minor concern, the Mediterranean population is classified as vulnerable since 2009. The main threats are fisheries bycatch and disturbances caused by boats.

This is a gregarious species that forms small stable groups. Foraging immersions have an average duration of 4-5 minutes. The species feed almost exclusively on cephalopods.

Risso´s dolphin is found in all temperate and warm seas in the world and prefers oceanic waters. It is also possible to observe the species in the vicinity of the submarine canyons. It is usually active on the water surface, where immature individuals can make jumps, while older individuals make medium jumps. Individuals may pull the head and the upper part of the body out of the water to spy. Rarely surf the waves or follow the boats. This is a rare species, classified by IUCN as a minor concern species. There are several threats that affect the species in the Mediterranean: acoustic pollution, environmental pollution and bycatch in fishing gear, mainly in drift nets. 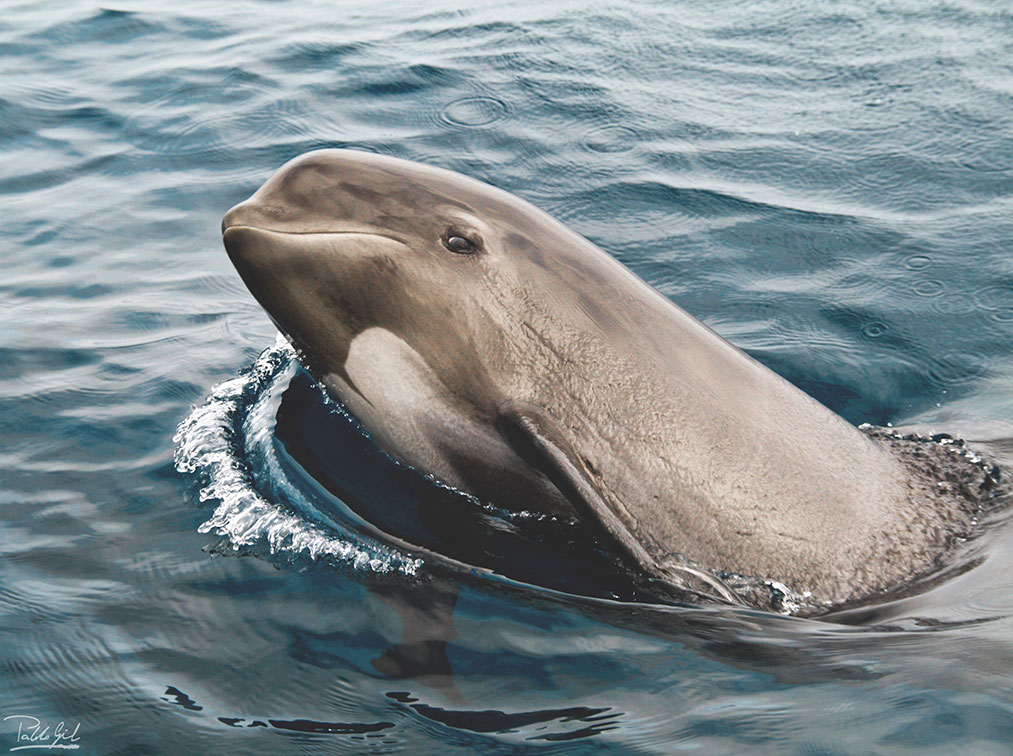 This is a species from cold waters inhabiting the North and southern Atlantic, Indian and Pacific regions. The population of the Mediterranean seems resident. The males can get to live between 35 and 45 years, while the females would reach up to 60 years of age. It feeds mainly on cephalopods. It forms small stable family groups that include between 2 and 4 generations of males and females. It is quite common to find them immobile on the surface. Normally individuals make several short dives before disappearing in a longer dive of a few minutes. When feeding, the dives can last up to 10 minutes. 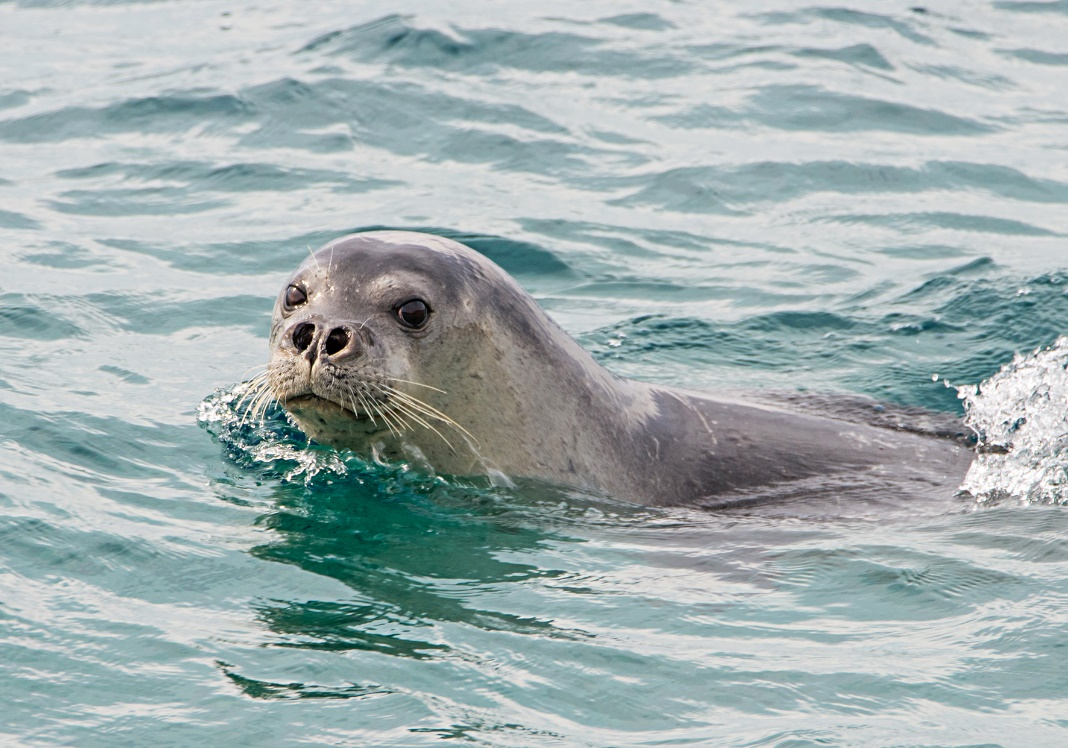 The Mediterranean seal is the only seal species that lives in the Mediterranean. However, the species has disappeared from most of its original distribution area and is currently only permanently present in the Aegean Sea in the Mediterranean, and in Madeira and in a small sector of Mauritania, in the Atlantic. The Mediterranean seal lives in groups, and his diving capabilities are very limited, only 7 or 8 minutes and up to 70 meters deep. The species feeds on fish and cephalopods, sometimes seeking food among fishing nets. At present, the species is classified by IUCN as critically threatened, with a population of a few hundred individuals. The main threats to the species are fisheries bycatch, the massive urbanization of the coastline and maritime traffic. Most of the sightings of the species at Catalan waters in recent years are misidentifications of other species. However, in the Balearic Islands, there are recent confirmed sightings of the species. 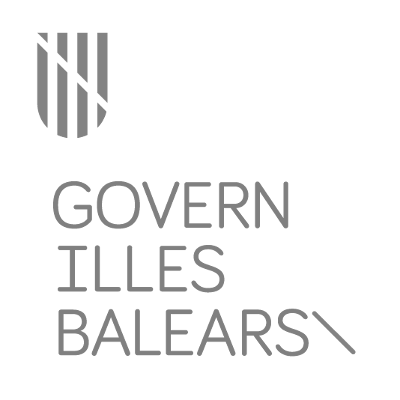